Goji berries are all over the body. Chewing directly works best. 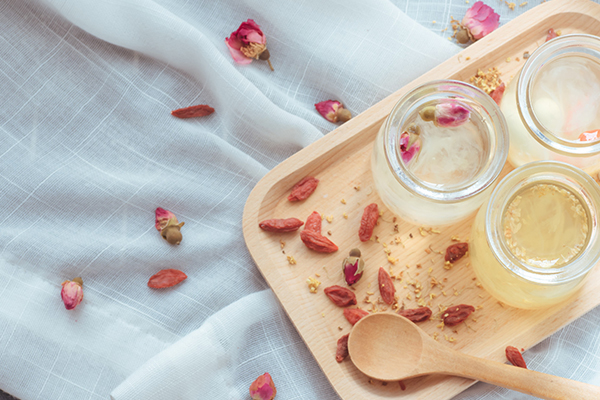 The following describes the nutritional effects and consumption methods of wolfberry.

Goji berries are all over the body

The wolfberry that people eat and use daily is mostly the fruit of wolfberry. Chinese medicine believes that Chinese wolfberry has a flat and sweet taste, belongs to the liver and kidney meridian, and has the effects of nourishing the liver and kidney and clearing the eyes. Modern pharmacological studies have proven that wolfberry has the effects of increasing peripheral blood leukocytes, enhancing phagocytic endothelial system phagocytosis, and enhancing cellular and humoral immunity; it has a promoting effect on hematopoietic function, as well as anti-aging, liver protection and blood sugar lowering. "Shen Nong's Compendium of Materia Medica" considers wolfberry "the main five evil spirits, thirst in the heat, Zhou Bi rheumatism. Jiufu, strong bones, light and not old". Daily consumption of Chinese wolfberry can be added in soup or porridge, and can also be used to make tea, such as Chinese wolfberry and chrysanthemum tea.

The leaves of wolfberry are bitter and sweet, and have the effects of removing irritability, strengthening heart, clearing heat and thirst, and clearing wind. Residents of Guangdong, Guangxi, Jiangsu and other places have the habit of eating young leaves of wolfberry. Modern pharmacological research believes that wolfberry leaves have a strong body and delay aging effects. The wolfberry leaves can be used as vegetables, can also be used as a decoction for tea, and can be eaten with tender wolfberry seedlings and pork, pork ribs, etc. Great food.

The root bark of Lycium barbarum is also known as "diosteal skin", which is one of the commonly used heat-clearing medicines. It has sweet, mild, cold, and belongs to the lung, liver, and kidney meridians. Digupi can clear lung heat, remove fire from the lungs, promote hydration and quench thirst, and has antipyretic effect. It is a good medicine commonly used to treat lung fever cough. . In addition, Digupi can also clear the heat of liver and kidney, treat bone steaming, and can be used to treat the symptoms of hand, foot and heart heat, five upset fever, insomnia, night sweats and other symptoms.

How to eat wolfberry

1, Good chew absorption. In life, many people like to soak water, make soup or make porridge with wolfberry, but in fact, due to the influence of water temperature, soaking time and other factors, only some useful ingredients in wolfberry can be released into water or soup. Moreover, lycium barbarum polysaccharide is a kind of proteoglycan. If it is boiled and heated for extraction, it will denature and reduce the efficacy. Therefore, from the point of view of eating methods, directly chewing and eating Chinese wolfberry will absorb the nutritional components more fully, which is more conducive to exerting its health care effect. But pay attention when chewing, you should not eat too much, otherwise it is easy to nourish too much, but it is not good.

2, when soaking with water or soup with wolfberry fruit, its medicinal effects cannot be fully exerted. Due to the influence of water temperature, soaking time and other factors, only some medicinal ingredients in wolfberry can be released into water or soup. And eat directly with your mouth, the absorption of nutrients in wolfberry will be more fully. If you eat Chinese wolfberry, it is best to halve the amount, otherwise it is easy to over nourish.

3, Generally speaking, healthy adults eat about 20 grams of wolfberry per day; if you want to have a therapeutic effect, you can eat about 30 grams per day. Do not eat too much wolfberry at one time, otherwise it will be harmful.

How to tell if wolfberry is good quality

1, color. Fresh wolfberry varies in color depending on the place of origin, but the color is very soft, shiny and full. The dyed wolfberry is mostly an old product of previous years. From a sensory point of view, the meat quality is poor, and the appearance is not shiny. Very bright and attractive; the dyed goji berries are all red, and even the small white spots at the handle of the wolfberry seed are also red, while the tip of the normal wolfberry is mostly yellow or white, and it has a dark brown after baking with sulfur.

3, smell. For sulfuric fumigated wolfberry, just grab it with your hands and cover it for a while, then put it under the nose and smell it. If you can smell a pungent smell, you can be sure to be fumigated with sulfur.

4, taste. Ningxia wolfberry is sweet and especially sweet to eat, but there is a bitterness in the throat after eating, and wolfberry in Inner Mongolia, Xinjiang and other places are a bit greasy; the wolfberry soaked in alum will have the bitter taste of alum. Sulfur wolfberry has a sour, astringent and bitter taste.